But not to get married.

No, not everything I’ve done over the last week has involved outer space.  There was still time spent in Azeroth.

It was time to wrap up the Scarlet Monastery by hitting the cathedral and defeating High Inquisitor Whitemane.

As usual, I went and positioned myself at the summoning stone out of habit.  Tonight however we decided to use the dungeon finder to jump into the instance.  Our group was:

So in we went. 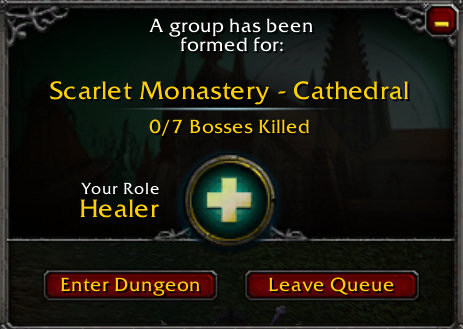 We were again magically transported across continents (or across the road in my case) to the cathedral.

Where we had to wait a bit because it turned out that Enaldie accidentally sold her weapon when cleaning out her bags.  And for some reason it wasn’t on the buy back list at the vendor so she had to go cruise the auction house for a new weapon.

While we waited, we spoke, as we sometimes do, of strange food we have encountered in our lives. 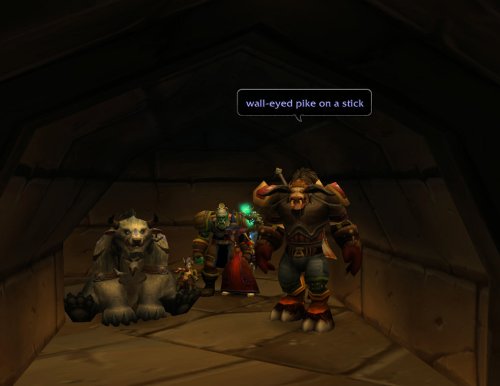 Available at the Mall of America

Shopping done, we moved on to the business at hand, which was clearing out the area from the entrance to the front of the cathedral.

And this is where the tale gets dull, since there were no issues doing this.  It was just pull, kill, pull, kill, whoops, I need to cast a heal, and we were there. 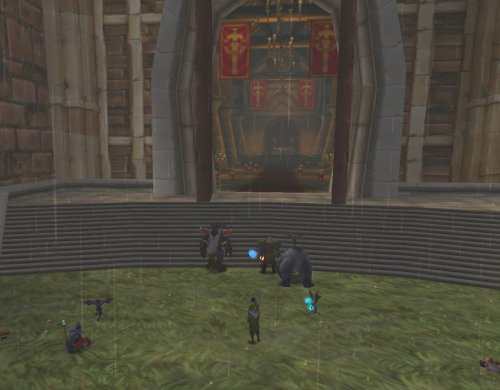 Got me to the church on time

At this point I’d love to be able to tell you that things got challenging.  But I cannot because they did not.

Clearing out the trash from the cathedral lead to some unanticipated aggro, but nothing that caused any alarm.  The big bad boss fight at the end flashed past even more quickly than the first time we did it and we were done.

Time for a shot of the team and… 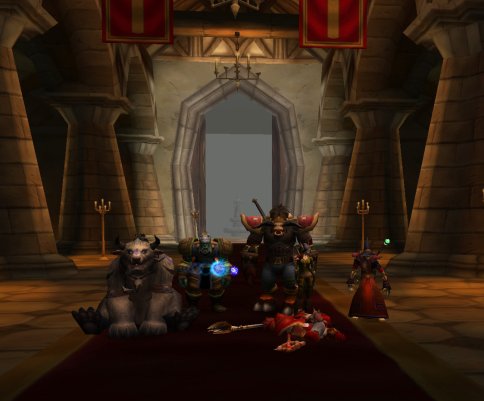 … and it was only 10:10pm.  We still had plenty of time to get into other sorts of trouble.

So we checked the list and Uldaman was next up, so we decided to head out that way… until we realized that only Bigbutt had the flight path out to Kargath in the Badlands.

Well, that is what dungeon finder is for!

We sent Bigbutt off to fly out there and pick up any quests we might need in Kargath and took a quick I/O break.  Being ever in search of preparedness, I started running from Hammerfall, the closest flight point I had, to Kargath just in case.  Kargath is a nice central flight point, if nothing else, and would open up travel between the Undercity and Booty Bay.

I had gotten most of the way through the Wetlands when we were all back, Bigbutt had the quests, and we were ready to enter Uldaman. 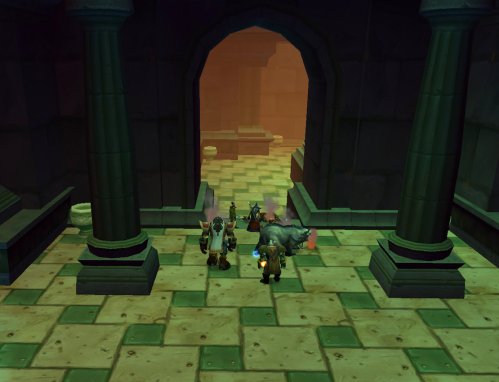 Some of use were experimenting with the dungeon finder along the way.

But shortly after entering, we realized that the lead-in quests for the instance require you to be just outside to complete them.  And since we jumped in via dungeon finder, which avoided that messy “getting to the door” part of Uldaman, we couldn’t just step back outside.

We were there already, so we did the first part of the instance. 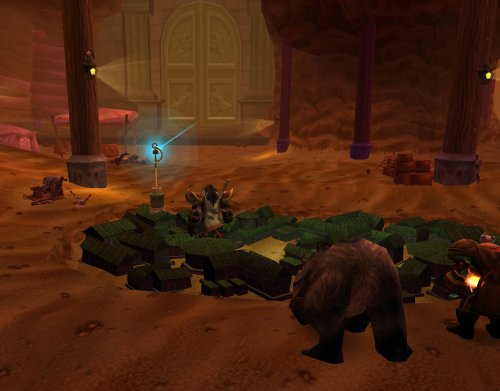 But we ended up just fighting our way around to the back door of the instance on the off-chance it wouldn’t notice and just let us step outside into the Badlands.

Fortunately I was already well on my way out there while Bigbutt was in the Badlands, so we met up at the summoning stone and pulled everybody through to go grab the flight point.  That made for a shorter ride for most of us. 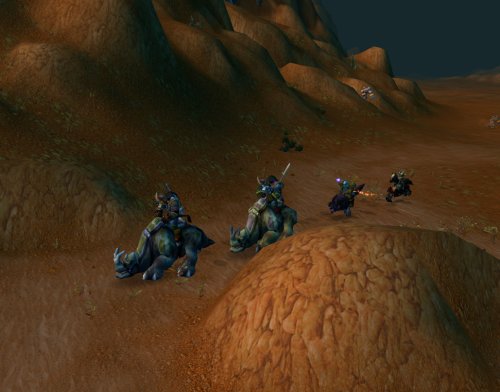 Riding through the Badlands

We all made it to Kargath without incident, but by the time we were all there and set, it was too late to start in on the instance again.  So Uldaman will have to wait for another night.

MassiveBlips is part of a network of “Blips” sites, including one dedicated to World of Warcraft called WoWBlips.

And, like all of the “Blips” site, they try to quantify things, ranking stories and sites for popularity.

Of course, these rankings are all automated and are somewhat dubious in many ways.  But the outstanding example of this has to be the following ranking which I noticed this morning: 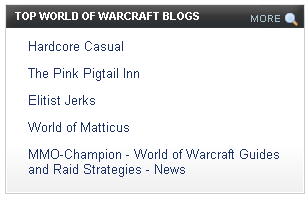 Yes, there is Hardcore Casual, ever the WoW fan site, at the top of the list.

We all suspected his WoW hate was just a pose, right?  And now WoWBlips has seen through his charade.

Good luck explaining how this worked out.

I’ve meant to do a quick post on this cool thing called the Azeroth Advisor for a while now.

When I first tried it my main characters were level 80 and its value was somewhat dubious.  But then we re-rolled horde and its guide to where to adventure and annotated maps became useful.

But this morning I found this in my mail box:

Thank you for being a subscriber to the Azeroth Advisor.

We are writing to inform you that as of February 17, 2010, the Azeroth Advisor service will be discontinued. Over the past two years, we’ve really enjoyed providing personalized guidance for new and experienced players of Blizzard’s World of Warcraft. However, we’ve decided to focus on the development of our own entertainment products, including our upcoming MMO codenamed Copernicus.

For the next 2 weeks, please continue to use the Advisor services, and take the time to save your maps and newsletters offline for future reference. After February 17, we recommend removing the Advisor add-on from your WoW AddOns directory and deleting the service from your launch items (instructions for doing so can be found below).

If you’ve enjoyed the Azeroth Advisor, we encourage you to sign up for the 38 Studios newsletter to ensure that you’ll be among the first to hear news about Copernicus and other products. You can also follow our feeds on Facebook and Twitter, or visit our official website. (Please note that this will be the only email you receive from 38 Studios unless you opt-in to receive the 38 Studios newsletter.)

Look forward to exciting news from 38 Studios in the coming months. We’ve sincerely appreciated being able to contribute to your enjoyment of World of Warcraft, and we wish you all the best.

Thanks!
The Azeroth Advisor Team at 38 Studios

So that is one more post I waited long enough on for it to be moot.  Yay for efficiency.

38 Studios, which sounds like they are a bit on the edge when it comes to money, or at least when it comes to Curt’s money, bought this little site, tinkered with it a bit, then threw it away.

What else do you say at that point?

We’ll never know how Azeroth Advisor might have done if 38 Studios hadn’t bought it.  It was a pay-to-play service before 38 Studios acquired them, which might have fit in better with some site like FilePlanet or Curse.  I was never clear on why 38 Studios did buy it, not that I expect them to explain such things to me personally.  There was some tech there they wanted I would guess.  But they did buy it, I hope they got what they wanted, because now they’ve killed it.

If you were using the tool because you played WoW and found it useful, you might be excused for not jumping for joy and running off to sign up for the 38 Studios newsletter.