After a week of getting class quests together and another wrapping up the lead-in quests for the instance, we were finally ready to step foot into the Temple of Atal’Hakkar, the Sunken Temple.

We actually ended up heading in on Saturday, on very short notice, when it became clear we were all around and had the time.  It turned out to be a good thing too, as during our usual time frame on Sunday the power went out five times at our house due to the heatwave hitting the west coast.  At least after the third time it blipped out and back on I took the time to plug my computer into the UPS that I had sitting, charged up, under my desk.

We got on and all flew down to Nethergarde Keep, the closest flight point to the instance.

In the Blasted Lands again

Our group for the run was:

We had managed to gain some xp as part of the preliminaries at least.  It had been suggested that we ought to be level 54 as a group to finish the whole thing off, but we figured we could get started and level up as we went.

We rode out through the Swamp of Sorrows, then swam out to the temple itself, heading up the stairs on the east side that lead into the depths. 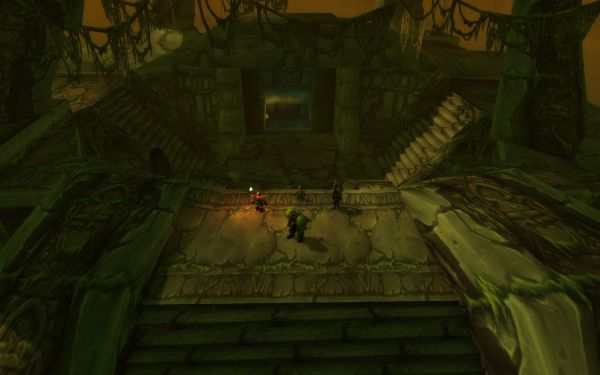 Looking down into the temple

That isn’t where the instance begins however.  Sunken Temple is like some of the other dungeons from vanilla where there is a series of paths between the meeting stone and the instance line, only one of which will get you where you want to be.

Sunken Temple is also multi-level, so the mini-map is often less than helpful.  So we wandered a bit and took a few wrong turns before Skronk recalled that there was some legend about following the masks to get to the instance.

There is a mask, so this way maybe?

I am still not sure this is true, since it only came up after we had about exhausted the false paths, but we did end up at the instance line shortly thereafter.

Into the instance at last

Once in, there was the question of where to go.

I had an old map that I had put in a post about Sunken Temple back in 2012, after Blizzard had shrunk the instance down to a “30 minutes or your pizza is free” level of effort. 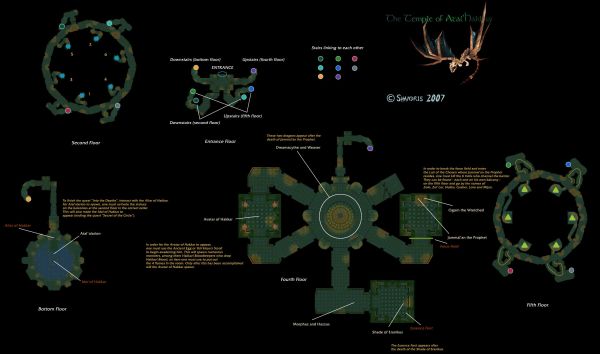 I included the map as something of a historical artifact showing what the place used to be like, back when the idea of Blizzard doing anything like WoW Classic was just a pipe dream of an old school underground.

But here we are in 2020 and the dream is real… and that map is useful again.

Looking at it, uncertain where to even begin, I suggested we head to down as that looked to be less… complicated for a first run.  Also, the boss down there has the drop for Moronae’s class quest, which would be good to finish.

We headed down, clearing the way as we went.  There was the central pool at the bottom of everything, but no boss there.  Instead, there was an altar with a quest update and some instructions.

When selected, the altar highlights the balconies on the floor above, each of which has a statue.  You have to activate the statues in the order indicated.

On the altar for the order

Then I realized I was facing south, not north, so that my orientation did not match the mini-map.  So I tried to transpose them in my head… failed… then simply faced the other way and ran the sequence again and jotted the correct list.

From there it was back up to where we started, then down to the second floor… the map names the floors bottom, second, entrance, fourth, and fifth… to clear out the balconies in the order given.

There are, of course, a bunch of mobs in the circle that connects the balconies, plus mobs on the balconies themselves, so it took some time to get around.  Also, part way into this I recieved a text from my wife asking me to call in an order for dinner for her to pick up since it was over 100 degrees out so nobody was in the mood to cook anything in the house. 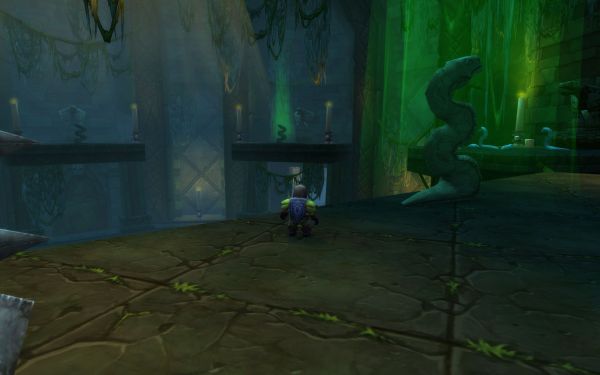 Some statues already lit up

Part way through this I realized that the map had the order printed on it, meaning that it doesn’t change, and that I need not have spent my time trying to make an ordered list of my own… though at least I got it right on my last try, so we didn’t get out of order.

When we activated the last statue Atal’Alarion, the boss we wanted, appeared down in the pool.

There he is below us

In hindsight, we could have just jumped down into the pool and grabbed him right then.  We had, on our initial run down there, cleared all the trash from the room.  Instead, we ran back the way we came and ended up having to clear again.

One of the things in the back of my head about Sunken Temple was a recollection that it had a brutally fast respawn rate.  None of this two or three hours on the timer.  So we ended up having to fight our way back down to the pool, where we found that the trash around the pool had just started to respawn.  In order to be safe, we started clearing that, with it respawning about two spawns from where we were clearing as we went around the circle.

The kicker was that the three mobs that we cleared down in the pool also respawned, so the boss would have some help.

Looking down at the coming fight

We decided to crowd control two of the mobs and kill the boss first, then work on the trash.  Ula could polymorph one, Moronae could hibernate another, and then we would all focus on Atal’Alarion until he was down.  Sounded easy enough, so in I went.

Things mostly went to plan.  It turns out he likes to punt players into the air, which inflicts quite a bit of damage when you land.  At least once I was below half health and flying up in the air expecting that I might die on impact.  But we managed to muddle through and brought him down. 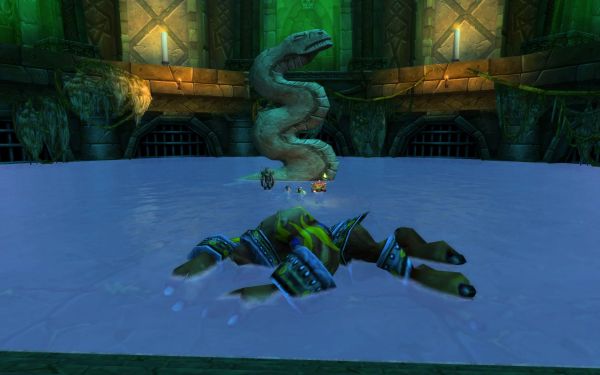 That was about when my wife got home with the dinner she had picked up while she was out, so it seemed like a good time to close out our first venture into Sunken Temple.  We took one last screen shot on the altar.

Sunken Temple was always going to require multiple visits.  I am just glad we managed to find a route that had a conclusion we could manage in the time we had… we started a bit later than usual and there were interruptions at my end… and even wrap up a class quest.

That is one boss down… many more to go.

The bosses of classic Sunken Temple

There will be at least a couple more trips in before we’re done.

Addendum:  Ula has made a trailer for our return to Sunken Temple featuring video from our first visit.

Ula has posted this with some notes and an old video over at her blog.

3 thoughts on “Down Stairs in the Sunken Temple”