The map in EVE Online at this moment on October 7th shows one big hot spot if you go to statistics and click the option to show ships destroyed in the last 24 hours.

That big orange ball in Delve

Over at DOTLAN it shows the most violent null sec system of the last 24 hours to be FWST-8, where more than 10K ships were destroyed. 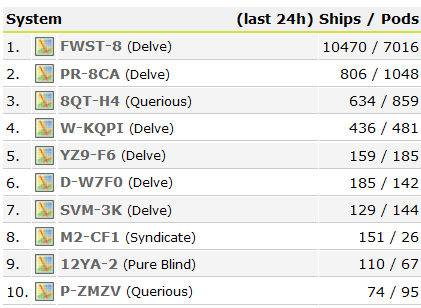 Delve is a dangerous place

Yesterday I mentioned the destruction that happened when the Imperium killed the first Keepstar that the invaders dropped in FWST-8 in NPC Delve.  I also mentioned that they dropped a second Keepstar that could be attacked shortly after that post went live.

Yesterday was the return to battle in FWST-8 as the Imperium once more went all in to defend Delve from the invaders.  Shortly after 17:00 UTC the Keepstar finished its deployment and went into its anchoring phase, during which there was a 15 minute window in which it could be simply blown up in one pass with no future timers.

With a days notice to prepare, both sides were ready to contest this 15 minute window.

I took a little break from work and joined in for the first wave of the attack, going with the Rokh fleet.  We were bridged in early, as FWST-8 is a single titan bridge from 1DQ1-A, the Imperium’s main staging and capital, and waited for the timer to count down.  Mike Flood gave us instructions and warped us on grid when the time was ripe.

Of course, there were many people in system, so time dilation was down to 10%.  The past official record for one battle, the one certified by Guinness, was 6,142 players in the battle at 9-4RP2, the infamous million dollar battle.  There is no doubt a methodology required to assess exactly how many players are in a system and connected and active, but I did see local well exceed that number early on.

I am not sure if that qualifies for a record, but it was a lot of people.

With all those people and things slowed down, Imperium forces did not arrive on grid and put enough damage on the Keepstar until almost seven minutes had run off the clock.  While everything else runs at 10% speed, the actual time runs in real time, so a slip up can cost a lot of time on the clock.

Warp disruption bubbles drawing as we arrive on grid

I was in full “potato mode” with graphics turned down to keep my client from bogging down trying to draw everything in sight in high detail.

We successfully stopped the clock at about 8 minutes and kept fire on the Keepstar.  As long as the structure was getting enough damage the clock would stay frozen, so we could not slacken our pace.

The enemy was out in force as well and clustered around the Keepstar to defend it.  Our job was to shoot the structure, their job was to shoot us.  When we were blown up and ended up back in 1DQ1-A, we had to re-ship and get back in the fight.  In this way the Imperium kept cycling ships, ranging from frigates to dreadnoughts, into the fight as losses mounted.

After I lost my first Rokh, I stopped and went back to work, but the battle kept going.  I peeked in on the INN live stream of the battle every once in a while and saw the Jabber pings keep rolling by as more and more people got into fleets to attack the Keepstar.

Later, when I was done with work, I jumped back in.  One of the fleets we were using was made up of ratting doctrine ships, Myrmidons and Gnosis, which were thrown on grid at range to send their drones in to attack the structure as they tried to burn out of ranged to avoid retribution.  I threw an alt in to try that.

That Gnosis did not last too long.  I had better luck with the Rokh, which required you to use a bookmark that put you 200km off the Keepstar, within range of the fit with the sensor booster running a targeting range script.

You had to land, align back out, lock up the structure, shoot, then warp off once the hostiles started to lock you up, a process easier said that done.  Each step of that could take minutes and it the bads started shooting at you, their guns would keep cycling while you sat there waiting for the server to pick up your command to warp off.  I died a few times for want of attention from the server. 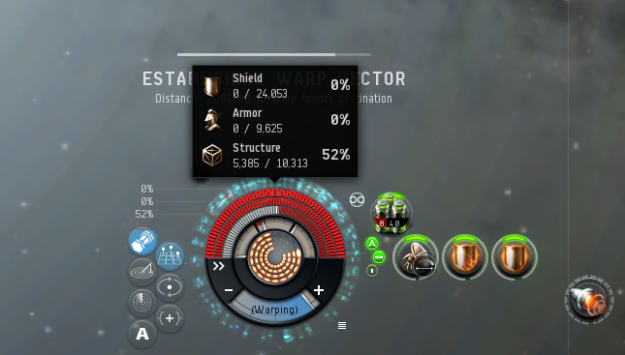 Just not going to make it

Also, I learned the hard way not to accidentally click on an overview tab that has brackets on. 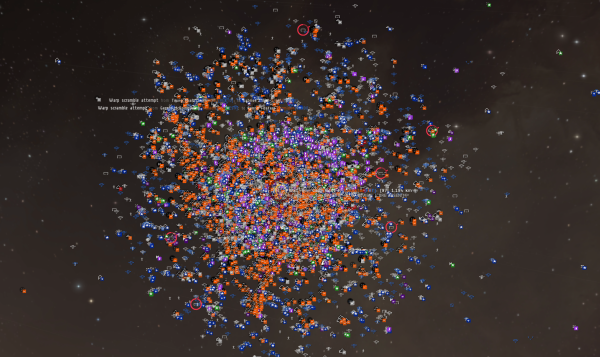 So much stuff on grid!

That locked up my client for a minute as it worked that out.  It was a good thing I was on a distant perch and not in range.  I might have been blown up before it drew all those brackets.

I had my main and my prime alt alternating with Rokhs.  Progress was being made on the Keepstar, but it was slow going.

As the day wore into evening at my end, the enemy switched up and sent their subcaps to our staging Fortizar in the system to bubble it up.  That was where we were bridging in, so warp disruption bubbles there would keep us from getting to the Keepstar.

Bubble battle at our Fortizar

That came scarily close to working.  Our fire on the Keepstar slackened enough that the timer started up again and two more minutes ran down before we got enough fresh ships back on grid to stop it again.

The grind went on.  As the hours went by people in Europe dropped out for the night as more people from the US joined in.  The total players in system began to sag.  The high water mark was not held for long, but it carried on close to 6,000 for quite some time.  As the evening turned to night that number dropped to just below 5,000 as sightseers and the tired left.  But the battle carried on.

My biggest mistake was accidentally warping straight to the Keepstar.  The server didn’t pick up my abort, but I managed to load high damage, short range ammo and get in quite a few hits before I was blown up.  I don’t think they expected that.

My pod on the structure after my Rokh died

After losing half a dozen Rokhs, I switched over to bombers.  There was a dedicated group throwing bombs from stealth bombers, good for 6K of damage each launch, while trying to stay alive.  You can uncloak, bomb, warp off, and cloak up again if your good and if the server picks up your commands.

It was then that the big panic of the night happened.  The enemy had brought in titans to kill our dreadnoughts faster.

We slipped again and the timer started counting down once more.  All bombers were ordered on grid to shoot their bombs and then use their torpedo launchers to get enough damage on the structure to stop the clock.

We managed it, with losses, but the clock was now down to under two and a half minutes.  Another slip and the Keepstar would likely be save.

This was especially agonizing not only because hours had been spent on the attack, but we were also about 80% done.  We just had to stick it out.

I could not however.  After about six hours of constant runs on the Keepstar it was getting late and I had work in the morning.  I called it a night at about the 90% mark, even as pings were going out for more people to join in.  I was in a bomber in system, so I warped off to a safe and then found I couldn’t safe log because the 15 minute timer was still running down… at 10% speed.  So I just cloaked up and left myself in space.  I left Jabber up as well and I saw the ping in the morning announcing that the Keepstar had been destroyed about an hour or so after I went to bed.

But the cost. My loss tally will be up significantly come the next weekly war summary.

The battle reports are all muddled due to so many groups showing up to fight or just gawk.  But it looks like the Imperium lost over 1.5 trillion ISK worth of ships, with more than 5,500 ships destroyed in the fight according to one battle report.

It also shows that we did that even as we were outnumbered.  It wasn’t us swarming a smaller group, but us throwing ourselves repeatedly against a larger force.  And, as with the last battle, the kill mail for the Keepstar itself went missing, so you can add 187 billion ISK to the attackers.  They also lost 3 titans getting to the battle, including one right in their staging system.

The details from another battle report show the ships that were sacrificed in the fight.

The Imperium is Team 1 on this chart

One fleet running for a while was Asher handing out Vexors with drones for people to fly in and attack the Keepstar with.  You got your Vexor, insured it, got it into battle, got blown up, and collected some free insurance ISK.

Our foes are feeling pretty good about killing so many of our ships.  But that wasn’t the real point of the battle.  The point was to show how hard we will fight when then step into Delve.  A lot of hay has been made about “flood plains” and how we let Fountain and Querious go without throwing in for a big fight.

But now we’re in Delve and we are ready.  Some propaganda was immediately forthcoming. 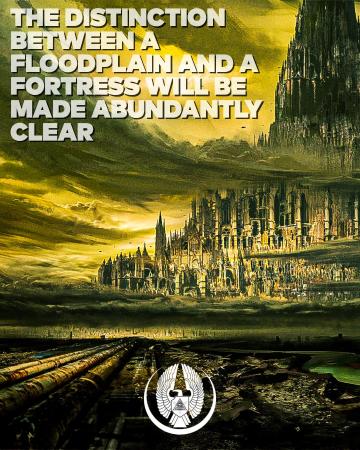 Now we are restocking our supplies and getting ourselves ready for the next round.  The invaders want to advance by dropping Keepstars rather than by attacking ours, no doubt thinking their superior numbers would make this a safe way to get into Delve.  Now they know they will have to commit to a huge fight with every step on that path.

I am sure both sides now are planning out next steps and digesting lessons learned.  A third Keepstar drop is expected.

12 thoughts on “A Costly Imperium Victory at FWST-8”