Back in October I wrote a little piece on my frustration at trying to find RSS news feeds from actual MMO producing game companies.  At that point I announced that only one of the thirty one site I checked had an RSS feed.

Of course I was wrong.  But that has been the case so frequently in life that I hardly notice any more.

Thanks to one tip and a bit more looking I ended up with a total of five sites with RSS news feeds of some sort, including one, the Vanguard FAQ RSS feed, which earned its own posting for its annoying (to me) design.  Since that was rectified (covered in a post last night) I decided to do another survey of MMO gaming company web sites to see if the state of RSS news feeds had changed in nearly two months.

I stayed with my original starting point, the list of games (both current and future this time) on the front page of VirginWorlds.com.

I decided to be a little bit more methodical.  To qualify for a spot on the list, the company had to have an RSS feed available on either its front page or on a page with a name indicative of news, the most common form of which was “news.”

My original, solo entry last time.  Easy enough to find on their main page if you scroll all the way to the bottom. They chose a non-standard icon, but it says “XML” on it, so it worked for me.  The feed itself is available in multiple languages, though I seem to get some French language news in the English feed.  The English language feed is here.

This is one I found after the first round and put in the comments for the entry.  It nearly did not make it this time because the feed is not available from either the main page of the page call “news.”  I cut them some slack since they have a second news page call the “Herald,” which is a name many newspapers have used, so they got a pass.

They chose the more standard small orange rectangle icon with “XML” on it that brings you to a page with a variety of feeds about the game.  You can find that page here.  The standard news feed is here.

Brought up by Brent at VirginWorlds last time around.  I missed it because it was on the page called “Support.”  But since they do not have a page called “news” I suppose that will do.  They have both a news and a game updates feed.

Sidelined last time because it was not a currently shipping game, this one still got a mention in my first post.  This time around, since I am counting all games, both current and future, it is on the list.  Their feed is right on the main page.  It has not icon, it is just a link inviting you to subscribe to their feed, which you can find here.  It is too bad the feed itself has not had any news on it since July.

A new feed for my list, Stargate Worlds actually has the “universal” RSS feed icon pictured below at the bottom of its main page.

At least the icon starts on the bottom of the page.  As the page loads it moves around.  The place it ends up seems to depend on which browser you are using, which version of that browswer, and the results of some Brownian motion generator.  Middle of the page on the far right side seems to be the most likely landing spot.

They also have a podcast icon flying around there as well.  Another gaming company podcast!  SOE is no longer alone.  You can find the news feed here and the podcast feed here.

Be warned, these are like FeedBurner RSS feed pages.  When you go there, they just look like a normally formatted page and not the jumble of XML you are used to.  When you subscribe to them, however, they work with your RSS reader just fine.

Another new one!  The feed is available straight from the main page, down in the bottom right corner.  There are two icons, one that says “XML” which supplies an Atom format feed and another that says RSS that supplies an RSS 2.0 feed.

And finally, Vanguard.  Their feed is right on the main page, on the left hand side, the “universal” feed icon in grey and white, but about 3x bigger than any version of the icon I have ever seen.  It does not even have to be orange.  The feed itself is here.

I wish I could say that my post had something to do with the change in feeds at the Vanguard site, but I have neither the evidence nor the ego to make such a claim.  I would guess that they smart people over there spotted their own mistake.  Sigil has been very serious about getting their message out lately, so that is a an easy conclusion to which to come.

This time around I went to 59 sites.  There are some patterns of course.  Bigger companies do not seem to be interested in news feeds.  Sites run directly by SOE, Turbine, or NCSoft were completely feed free.  Companies like that have marketing departments who want your email address, so are loathe to let you get news without having you either visit the site or subscribe to a mailing list.

The exception to the big company rule is Dark Age of Camelot, but I think they had their feed before EA bought them, and EA may not have noticed it yet.  Of the two other oddities, I think ArenaNet runs the GuildWars site as opposed to NCSoft, while I know Vanguard is not beholding to SOE yet when it comes to their site.

What surprises me is that more small companies do not have a feed set up.  Maybe if news and staff are sparse, as with Meridian 59, you can accept that.  But a small company that wants to get the word out about news, updates, and anything else, this seems like a natural.  you want the people who run MMO news sites to get your message right away.  If *I* can have an RSS feed for this blog, any company ought to be able to put one together.

The total is 7 feeds out of 59 MMO game sites.  Not very good, in my opinion.  I will check back in a few months and see if this changes.  Corrections and comments are always welcome.

I had one of those nights Wednesday night.  I had a good two hour chunk of time in which to play.  My wife was out, my daughter was asleep, the cats were off my lap, I was cleared for take off.

I logged into EverQuest II and then wasn’t sure what to do.  I have only been playing my fae and my ranger since I got back into the game, and the ranger has only been out to provide dps in a group with Gaff on his quest to pillage the Ruins of Varsoon for all the master and adept drops he can find.

My other characters… I haven’t been able to get excited about them.  They are all still stuck wherever I left them back in January.  Their journal’s are all full of quests and collections I have long since lost track of.  I have used their trade skills a little and mentored down to help people with specific tasks, but I cannot quite get back into the swing of playing any of them at the moment.

Since it was too late in the evening for Gaff RoV harvest, I logged in with Blintz.  If nothing else, jumping off the platforms in Kelethin brightens me up a bit!

But even with Blintz I was feeling a bit out of sorts.  His quest journal had a few green quests, which I wrapped up (including citizenship, which got fixed with a patch earlier in the week) and then started in on the blue quests.

I had two of them.  Both were over in the orc area with the tunnel that leads to Crushbone.  I couldn’t get a grip on either of them.  One required me to kill members of the Crushbone Expidition for drops, but I have been unable to find any orcs that match that description or give me any quest updates. (Another nice EQ2 feature, you know you’re killing the right mob for a quest because you get an update even when there is no drop.)

The other quest required me to get a drop from a Crushbone Herbalist, which I did in one kill, then slay a named orc, whom I could not find.  But that corner of GF was full of faes, probably looking for the same named orc.

I decided I would at least use the time to get my harvest skills up.  But all those fae were also harvesting like crazy, so nodes were few and far between.  It was turning into one of those nights of gaming ennui.  Nothing to do, nowhere to go, nobody to talk to.

So I decided to run to Antonica.  Open spaces, lots of harvest nodes, no competition!

Not only was the run through Butcherblock fairly easy as a fae (once you get to the cliff over the beach, you can just jump off) but I got a bit of discovery exp.  The aggros are far enough back from the road the whole way that I did not pull any of them after me.

I missed the boat to Thundering Steppes, but sprinted to and made the boat for Nektulos Forest.  Here is Blintz aboard the boat showing off the full chainmail fae look. 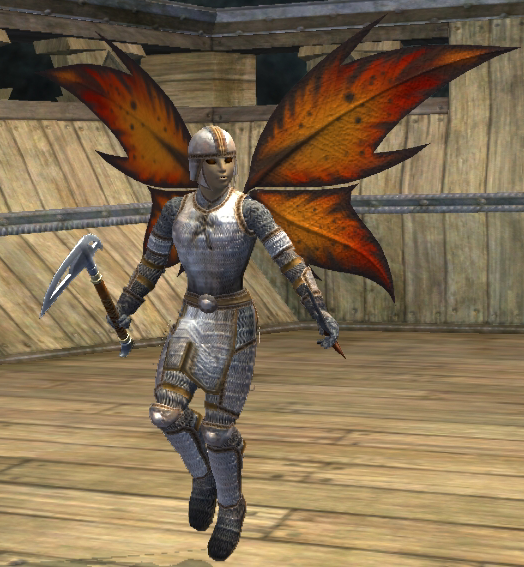 Once there I got the discovery exp for Port Naythex, zoned to the Thundering Steppes, and ran to Antonica, picking up discovery exp along the way.

Once in Antonica, I took the griffon to Qeynos and headed up the Qeynos Road to the harvesting area around the cabin.  I was all alone.

It is always odd for me to be alone in Antonica.  One of the things about playing a game right at release is that the lasting impression you have of low level zones is them being full of people.  Later, when you are out there and all alone, it seems so strange and a bit sad.  I have that same issue with the area in front of Qeynos in EverQuest.  In my mind it will forever be full of people hunting snakes, rats, and Fippy Darkpaw.

But, that aside, my visit was very fruitful.  I got all of my harvest skills up past 90, which I need to start in on harvesting tier 3 (20-29) nodes.  I also managed enough discovery exp to get an AA point and I slew enough gnolls and other wandering aggros to level up.

At the end of the night, when I was logging off, I recalled back to Kelethin.  It was nice to have Antonica there when I needed it, but I want to stick primarily with Faydark for now.