As I noted last time around, the group managed to get our main characters to level 68.  That means they have hit the minimum level requirement to head to Northrend once Wrath of the Lich King Classic launches next week.

It has been many years since I started a Death Knight, and I am pretty sure I only did it twice back then, so my memories of it are vague to say the least.

Anyway, we got together over the weekend and all rolled one up and jumped into the DK starting zone, where you meet the Lich King first thing. 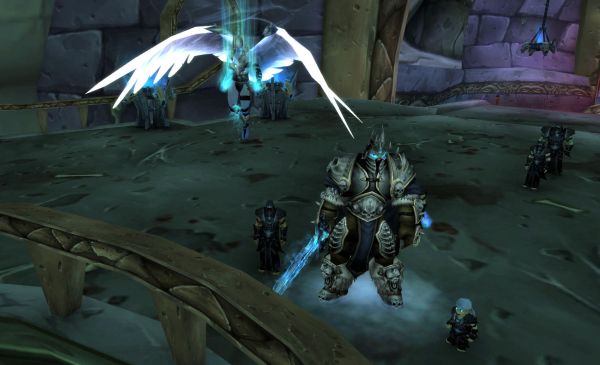 Welcome to my expansion, can I offer you a quest?

Names were difficult this far down the line, but we all came up with something.  I went with Irondam, straight from the name generator, while Ula kept up with her usual theme, rolling with a gnomish DK named Krula.  Potshot went with Nordwink while Beanpole rolled a Dranei DK named Leiderhoser.

So named we went about the tasks of learning the DK trade, having swords issued, the whole runforging thing, and then having to fight somebody on our side to prove our value before we were allowed to fight the enemy. 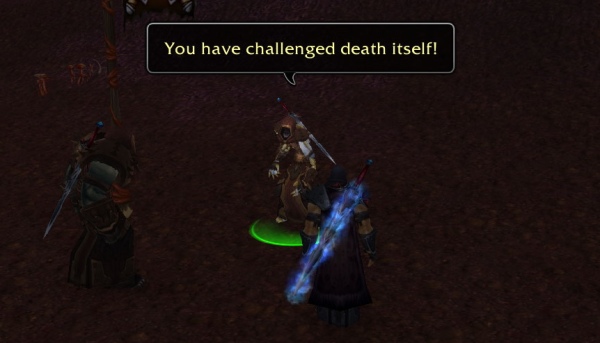 Dude, that describes literally all of us

Then we were set upon the locals down the hill, who seemed to have had the bad luck of picking a nice little valley in between Light’s Hope Chapel and the landing zone of the Lich King.  Time to go slaughter the innocent… not that I ever turned my nose up at a murder for hire offer in Azeroth before. 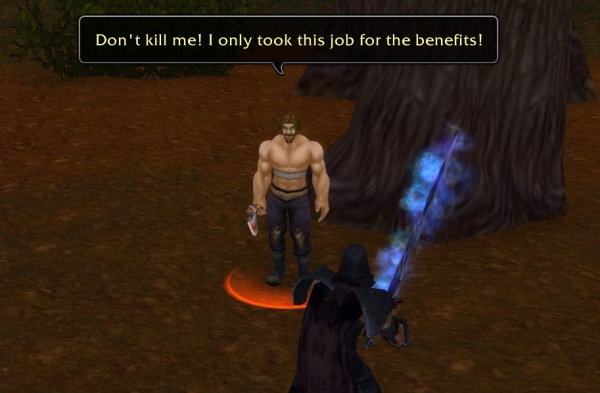 The nice thing is that early on you get a quest to go steal a horse that becomes your very special DK mount… special in that every other DK you see has the exact same mount… but other classes don’t get it.  So there!

After some running about you get to one of the bedrock features of the Wrath expansion, the vehicle interface that lets you man guns or fly mounts that have special attacks.  We’ve all seen it a million times by now, but this was hot new stuff back in 2008 and Blizz was going to show it off to us.

It was actually a pretty decent addition to the game, and one of the big things that made Wintergrasp as fun as it was.

Of course, it was not without the occasional glitch.  For whatever reason, the second time we got the UI for a quest, it completely failed to function for me.  I was flying around on a great big dragon thing and couldn’t incinerate the hapless victims below or shoot their ballistas off of the tower tops. 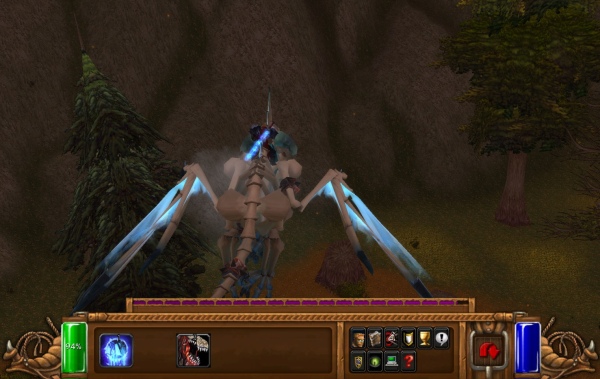 I clicked the button harder, but it still wouldn’t work

Fortunately, since we were grouped up, we all shared quest progress on most quests, so as long as I stayed close to the rest of the group I ended up getting credit, bypassing my issue.  I still don’t know what happened as I had no problems in the UI before or after that during our session.

We also had to run back to the stronghold to train up skills and look into spending skill points as we leveled up.  Another Wrath feature is the ability to preview your talent points before you commit, but you have to turn that feature on in the settings, and you have to do it for every character.

Leiderhoser ended up going Frost spec because he forgot to turn that feature on.  It should be on as an account-wide default, but Blizz will be Blizz.

So there we were, out and about, killing stuff, routing the Scarlet Crusade, and basically living the DK lifestyle.

Outstanding in their field

And then we got some tasks from our old nemsis, Prince Keleseth.  We’ll be trying to deal with him soon enough in Northrend, but here he wanted us to go out and beat some Scarlet Crusade members to try and get information out of them.

This turned into a pretty long quest, and all the more so because it was one where you do not share quest credit with your group.  You have to run around beating them with special weapons, hoping the RNG will make them confess.  I was the last to get a confession, and I must have hit two dozen mobs before I got it. 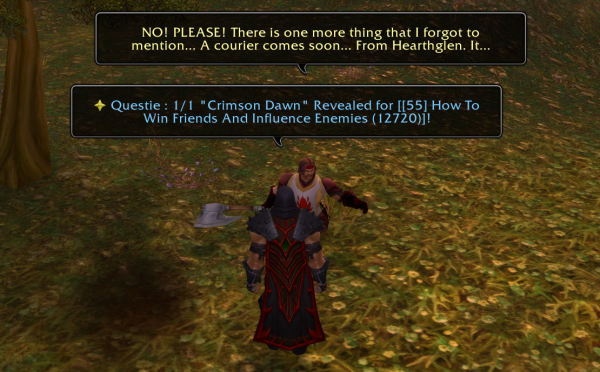 There was also an amusing run in with the town’s mayor, whose name is Quimby, a nice Simpsons reference.

But there was also some foreshadowing, a bit of a “Are we the baddies?” moment in the quest chain as you run into some prisoners taken by the Lich King’s forces, once of whom knows you.

Why does everybody make being bad feel awkward?

Interestingly, because we were different races in the group, we got to see that everybody’s old pal was of the same race.  The gnome knows every gnome who comes by, the dwarf all the dwarves, and so on.

There was some more running around, including possibly my favorite bit from the whole DK starter story, and probably the only part I ever remember, the apple tree disguise.

At one point you must waylay a messenger, and you do so by hiding behind some wood painted up like a tree.  I got us all to deploy our trees at the same time just to get this screen shot.

We have a small orchard here

After wrapping all of that up, it is finally time to head off to the grand finale of the who quest chain.  You are sent off to meet up with the rest of the forces of the Lich King who are set to attack Light’s Hope Chapel.

There is a big setup for it, and when you arrive you have to wait around until the timer runs down and the battle can commence. 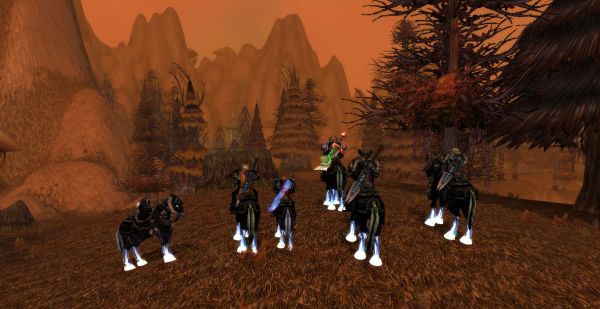 The battle will commence in three minutes

There is a tally up at the top of the screen which shows the defenders vastly out numbered by the scourge.  And then the time comes and you launch into the event and a bunch of fighting appears to be going on, but in reality the outcome is preordained.

The forces of light prevail and turn the DKs to their side even as the Lich King and Tirion Fordring play out a bit of their own foreshadowing here at the start of the expansion.

He did not have our best interests at heart

And so the disgruntled DKs became the Ebon Blade and we ran off to Stormwind to join the crusade against the Lich King.  You have to do that walk through down where people boo you and pelt you with things, then talk to the king who tells everybody to be nice to you, and then you’re in the club and can hang around in downtown Stormwind with everybody else.

All on our special mounts by the fountain

The whole thing was mostly an enjoyable lark.  We managed to go from level 55 to almost level 60 during the events.  Not bad.  Now we’re stuck getting through Outland before we can actually join in with the war on the Lich King, but that is the way it goes.

More importantly though, we were all able to claim our special mount in retail WoW for finishing the DK starter zone. 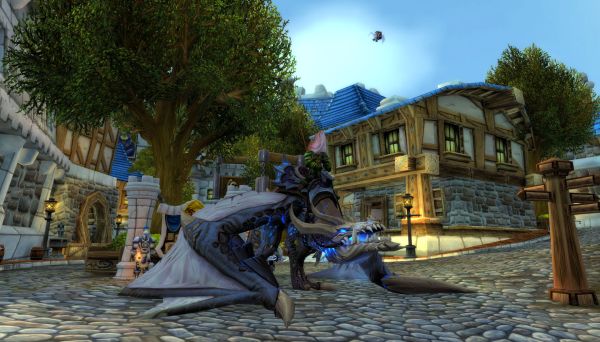 That guy on the mount

I don’t know if any of us will use our DKs much more.  I went out and did enough to get mine to level 60, so he could buy flying and a mount if he had the gold.  If the expansion wasn’t next week, the current xp bonus might hurry us along.  But with only a few days left, that seems unlikely.

1 thought on “We Make Death Knights”